13 May More Government Stimulus via the HEROES Act 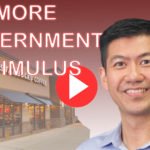 On May 12, House Democrats released the text of their proposed stimulus package bill, called the HEROES Act.  It is valued at $3.2 trillion which is even more than the $2.2 trillion that the CARES act cost.

Video Index (with direct links)
0:37 – Overview of the new proposed stimulus package, the HEROES Act
1:24 – The wheels on the omnibus go round and round
2:07 – Possible California relief funds for renters and property owners
4:50– AMC Theaters’ potential purchase by Amazon, plus the only theater where you can watch a movie in SoCal
5:37 – Mystery shopping in Dallas and LA to check on retailers’ compliance to Coronavirus protocols
7:28 – Nationwide survey results for rent collection from mom and pops retail establishments

The HEROES Act is still in the proposal phase and needs to be approved by the Republicans.  Here are some highlights of the bill that may be relevant to you:

According to an article in the LA Times, two proposals are expected to be unveiled that will offer relief for both tenants and landlords.
The first is a renter assistance program that asks landlords to forgive rent payments in exchange for equally sized tax credits spread out over a 10-year period starting in 2024.  The thinking here is that tenants wouldn’t have to pay rent, but the landlords who can afford to hold on to the property can keep the tenant in there and not have to deal with eviction.  Over the course of 10 years, tenants would agree to reimburse the state for rent payments.  Some who could prove financial hardship could have the total amount forgiven.  In effect, their rent would be covered by the state.
The big issue I see with this is that the landlord doesn’t receive any benefit from this for four years.  Are you willing to wait that long and gradually get paid back over 10 years?  I wouldn’t be.  But one interesting component of this proposed plan is that the tax credits are transferable, so a landlord who is not collecting rent could sell his property, including the value of the future tax credits, and this could create an interesting market for tax credits.
The second plan would give the opportunity for any California taxpayer, from individuals to large corporations, a chance to prepay 10 years’ worth of income taxes for a slight discount.  The state would offer $30 billion in long term tax credits for $25 billion upfront.  I guess this might be worth it if you knew you were staying in California, and if you knew what your income tax would be over 10 years, and if you had the money to pay those taxes upfront.  But it just seems like not enough of a discount to make it worth it.

AMC Theaters being bought by Amazon?

I want to give a shout out to AMC Theaters, who was in rumors to be declaring bankruptcy soon.  On Monday, their stock jumped up 30% on the news that Amazon might be buying AMC.  I have mixed feelings about this.  I love going to the movies and obviously don’t want to see a theater chain fail, but I’m not sure I like that the company is being saved by Amazon.  But hey, I guess I’ll take it if it means that AMC will stick around and continue to show movies.
Speaking of movies, there is one movie theater in the area that’s still open, and that’s the Mission Tiki Drive-In Theater in Montclair.  This property was sold last year and the buyer planned to tear it down to build some industrial property.  But it’s having its last hurrah right now as it’s the only place you can see a movie.  The owner says that weeknights at the theater right now are like summer weekends.  So if you want to go see a movie, go check them out.

Let’s talk about what’s happening in the retail world.  As you know, many states have opened for business, with California opening up in a very limited capacity.  We look to other states and areas that have opened up before us for a model of what may happen here in California.  The state of Texas, for example, opened up a week before California, and I want to mention an interesting experiment that took place recently.
Mark Cuban, the owner of the professional basketball team the Dallas Mavericks, and one of the sharks on Shark Tank, did an interesting experiment in Dallas where he hired a team of secret shoppers to go around town and see if people were shopping safely and if the stores were operating in a safe manner.  His team called 1000 restaurant and retail locations and physically audited 300 locations.  I guess when you’re a billionaire, you can afford to spend money on these types of things.
Well, the conclusion of his findings is that the retailers in Dallas aren’t following the rules.
I’ll highlight a few findings from his report.
Mark Cuban has said that he plans to do this a few more times to track trends and see if businesses will improve in the coming weeks.  So we can either see this as a model for how California and other states will open up retail in the future, or hopefully this will serve as a warning for California businesses to follow safety protocols more closely so that the public does feel safer to go out and shop.
And just after this weekend, on a smaller scale, the LA County Department of Public Health did a similar survey to 410 businesses and found 162 of them were in violation of safety protocols.  Some of the biggest offenders were flower shops that were allowing customers to shop as usual, not requiring face masks.
These businesses are going to have to improve compliance or they’re going to get shut down again and we’re going to be back to where we started.

Linkedin and Alignable, a small business networking site, report that 40% of small businesses nationwide have skipped paying May’s rent, with hair salons and nail salons among the businesses with the lowest rates of rent payment, with 66% not paying full rent.  Restaurants and bars are next with 56% payment, followed by retail stores with 39%.  So, based on this nationwide data, and the anecdotal data that we’ve been hearing at Progressive Real Estate Partners about April’s rent collections being about 50%, if you’ve been able to collect at least half of your rent for May, you’re doing better than average.